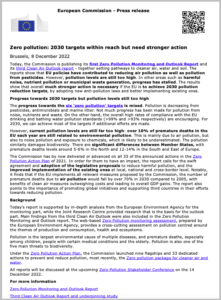 An integrated report on the monitoring and outlook of air, water and soil pollution has been issued by the EU Commission, to assess the progress made on the pathway towards a toxic-free environment by 2050, and the shortcomings which need to be most urgently tackled in the future.
The ‘monitoring’ component was assessed by the European Environment Agency, focusing on the progress made and the distance toward achieving the 2030 targets of the Zero Pollution Action Plan (ZPAP).
Soil pollution was also addressed, turning out to be one of the most difficult to assess due to the lack of a regulatory framework for monitoring and reporting which is now being considered in upcoming legislation (Soil Health Law). Despite that, growing evidence shows long-term damage being done to ecosystems that are crucial for healthy food and biodiversity. The report also indicates that the progress towards circular economy targets has been slow, with residual municipal waste levels remaining essentially unaltered since 2016 and packaging waste growing by 19% from 2010 levels.

The ‘outlook’ presents modelling and foresight results that provide a perspective on whether the EU is on course in terms of the objectives and targets of the EU Zero Pollution ambitions and the associated EU legislation. Soil quality suffers from historical pollution with persistent industrial chemicals and heavy metals, nonetheless the Soil Strategy for 2030 is trying to close the gaps and put Europe partially on track to achieve the targets of the ZPAP and the EU Green Deal.