On 26 September 2016, a coalition of Dutch parties presented the manifest ‘Organic matter: life in Dutch soils!’ to the Dutch parliament. The coalition included major agricultural and industry associations, NGOs and scientific research institutes. ECN member BVOR together with farmers’ organization LTO initiated this manifest. Also the Dutch Waste Management Association was amongst the signatories. 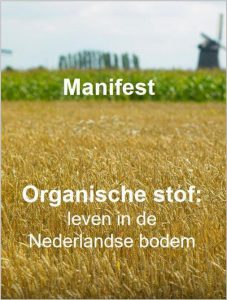 The manifest calls upon the Dutch parliament to use the present evaluation of the Dutch fertilizer law to improve the position of organic matter in legislation. This improved position shall do justice to the many benefits of improved organic matter in soils, e.g. in relation to soil fertility, biodiversity, climate change mitigation and the circular economy.

An improved position for organic matter is necessary as currently organic matter in Dutch soils is under pressure, and in many cases declining. This is the result of fertilizer legislation which primarily focuses on reducing nitrogen and phosphorus emissions, thus reducing options for farmers to feed soils with required quantities of organic matter. The manifest partners ask for legislation which focuses on integrated, sustainable soil management, ensuring high productive soils in the future.

The presentation of the manifest was followed by a roundtable meeting in the parliament, during which scientists, industry and parliament delegates exchanged views on the importance of organic matter in soils and a facilitating legislative framework.

The english version of the manifest is available here: