Thanks to a pioneering consumer focused initiative, households in Sligo City are leading the nation in food waste recycling according to a new report launched in January by the Minister for Communications, Climate Action and Environment Richard Bruton TD. 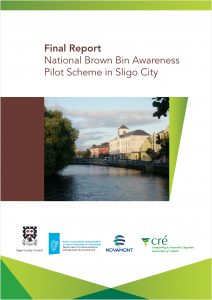 The national pilot scheme of the brown bin education programme was done in Sligo City. The aim of the Pilot was to see how the provision an education programme of waste advisors going door to door, kitchen caddies and compostable liners to householders, could improve the amount and quality of food waste in the brown Bin.

By the end of the 12 month initiative, the amount of food being recycled from Sligo households more than doubled and at the same time, the amount of non-compostable material (plastic, metals, glass) found in brown bins was slashed from 18% to 1%.

Percy Foster CEO of Cré – Composting Association of Ireland said 'the results of the project showed that by giving people a kitchen caddy and liners to use in the kitchen makes recycling food waste easier and cleaner for people. Given the positive outcome of the pilot it should be emulated across the country'.

In Ireland, every household in villages with more than 500 people should have and use a brown bin for food waste but to date getting people to use the bins has been a challenge. The study showed that educating households on correct waste management practice as a whole, allows for better quality recycling and a reduction in disposal of waste to landfill which in turn has a financial gain for the householder.

The report can be downloaded here.