On 22 October the Commission published the updated Bioeconomy Strategy under the title ‘A sustainable Bioeconomy for Europe: strengthening the connection between economy, society and the environment’.

Europe's Bioeconomy Strategy has been launched and adopted in 2012 and addresses the production of renewable biological resources and their conversion into vital products and bio-energy. Under the lead of DG Research and Innovation, the Strategy was co-signed by several other Commission departments namely DG Agriculture and Rural Development, DG Environment, DG Maritime Affairs, and DG Industry and Entrepreneurship.

With the 2018 update of the Bioeconomy Strategy the Commission aims to accelerate the deployment of a sustainable European bioeconomy so as to maximise its contribution towards the 2030 Agenda and its Sustainable Development Goals (SDGs), as well as the Paris Agreement.
The update also responds to new European policy priorities, in particular the renewed Industrial Policy Strategy, the Circular Economy Action Plan and the Communication on Accelerating Clean Energy Innovation, all of which highlight the importance of a sustainable, circular bioeconomy to achieve their objectives.

The update proposes a three-tiered action plan to: 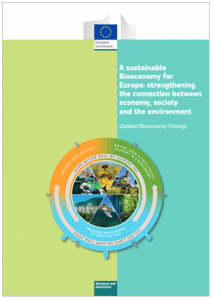 Further information, fact sheets and a video can be accessed through the Bioeconomy Strategy website of the Commission.